9 Ways to Have Fun at a Business Conference 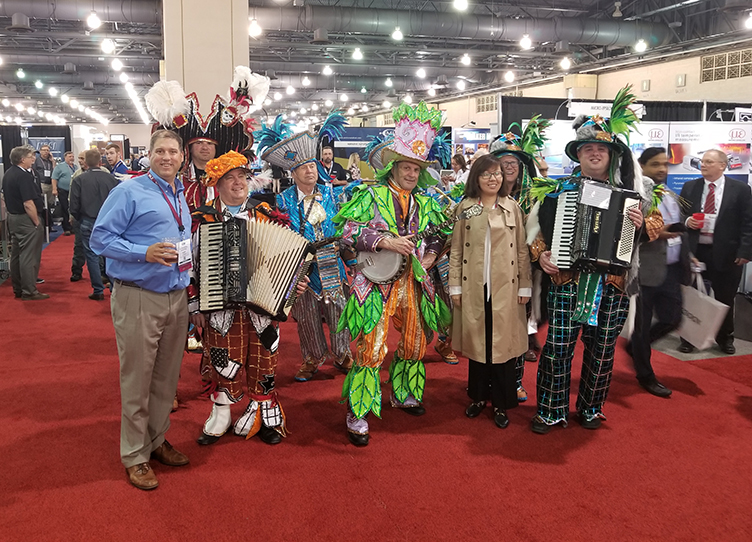 Every year the Association for Iron and Steel Technology (AIST) hosts a large trade show featuring industry professionals from all over the world, technical papers, discussion panels, and a vendor fair. This year, the trade show was hosted by the city of brotherly love at the Pennsylvania Convention Center in the heart of downtown Philadelphia. Three of DLZ’s project managers from our Burns Harbor, Indiana office attended to man a booth—and unexpectedly had an amazing time. They discovered nine ways to have fun while at the conference.

1. Business First
To have fun on a business trip, you first must make sure your business goals are achieved. I highly recommend meticulous planning for the event, especially the logistics of getting people and equipment to and from the venue. Establish goals before attending and ensure that you meet those goals during the conference. For example, our goal was to meet face-to-face with specific clients we would otherwise rarely be able to see, such as those from California or Canada.

2. Ask Questions
Even though I have been to Philadelphia in the past, I really enjoyed being a clueless tourist this go around. Instead of trying to look something up online we would ask a local where to find the best cheesesteak. By the way, in Philadelphia it is JUST a cheesesteak. If you ask for a Philadelphia cheesesteak, you will get made fun of pretty quickly. I tried Jim’s on South Street and the sandwich was phenomenal. More about food later. Asking questions is not just about recommendations; it helps you meet some good people. Asking questions also conveys your interest in someone else. I found that just asking simple questions and shutting my mouth often led to hearing incredible personal stories and learning interesting things about the city. 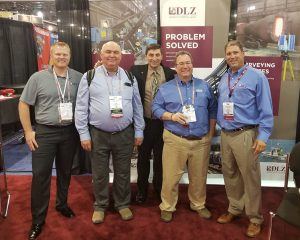 3. Find Good People
Networking is a central activity at a tradeshow, so it is not hard to meet interesting people. On the first night of the convention, we were able to round up about 10 people to go out to dinner. It is amazing what you will learn from normally shy engineers—I can say that, I am one!—over a single bottle of wine (my boss is reading…). I must say, engineers are focused and passionate about what they do and if you talk about a subject they are interested in, hang on to your hat. Did you know an average tackle by an NFL player can reach 1600-lbs of force?

Good people come in all shapes and sizes. Stopping to have a conversation with someone you don’t know can be scary at first but eventually it becomes natural. Never pass up the opportunity to talk with people.

4. Embrace Your Inner Foodie
Travel has its ups and downs but even a bad trip can be saved by some good, regional food. When you describe a trip what do you describe? You talk about where you stayed, what you did, and what you ATE. This trip was filled with amazing food. Every meal was decided by someone we met or recommended by a local. My two favorite meals:

Jim’s cheesesteak on South Street. We went with the traditional fare: steak, onions, and cheese whiz on an Italian roll. The sandwich was messy and gooey but oh so yummy. The beef was tender with a deep, savory flavor. While we waited for our order, we chatted with the cook about attending punk concerts.

Pearl’s Oyster Bar in the Reading Terminal Market, conveniently located across the street from the convention center. The best part of Pearl’s may have been our server, Brian, who was born in Philadelphia. When I asked for his recommendation between a crab cake or shrimp po’ boy, he simply said, “order the Vietnamese Roll.” He had an obvious passion for the finer details of oysters. While I cannot tell you the difference between a long brine or an ocean salt soak, I can say the oysters were incredibly fresh and left me wanting another half dozen. The Vietnamese roll was a bit tangy with some heat that was complimented by perfectly cooked shrimp and thinly-cut carrots. Thanks for the recommendation Brian. 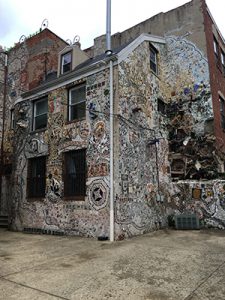 5. Have an Open Mind
I have had the privilege of traveling all over the world for work. At the end of the day, I just want to relax. My colleagues and I made a conscious choice that we would try new things during our trip to Philly. We took suggestions. Whether listening to new music or trying a small, out of the way diner or just strolling the streets to look at street art, having an open mind served us well. Philadelphia is a rich city with an incredible history. What I did not expect was the dedication to art of all mediums. From painted mailboxes to an entire alley that creates a flowing, ever-changing mural, the city itself becomes the display case.

6. Plan Ahead
There are endless opportunities in a major city. During the convention, there were concerts, a 10-mile run, NBA playoffs, NHL playoffs, and countless smaller events to suit everyone. Find what you may enjoy, but at the same time, don’t lock yourself into a rigid plan. We chose a single scheduled event, a punk concert the night before the vendor fair started. Nothing contrasts with hardcore technical discussion quite like a night of moshing in a sweat-filled concert venue.

7. Don’t Over Plan
Do not take the previous point about searching for events too far. You can over prepare and miss out on good times. Originally, we thought about purchasing tickets to the Philadelphia vs. Boston NBA playoff game. While that would have been fun, we would have missed the dinner with engineers in point 3.

When in a new city, there is nothing like the feeling of discovery that comes from the spontaneity of unscheduled, directionless walking. There is just something exciting about coming across the unexpected; like a community garden surrounded by commercial buildings or group of new graduates that decided to set up a dance competition on a random street corner complete with a wireless speaker. 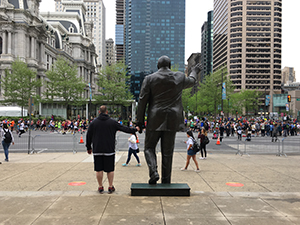 8. Don’t Be Afraid of Being Silly
When I first decided to blog about the conference, I had no idea what to expect or even what to do. We decided to just take pictures… of everything. From selfies at 6am walking through the airport to posing with statues around the city—every turn we took the camera was ready. As time went on, we did more and more silly things. Eventually, the people at the conference started to join in. When people see you having fun, they inevitably want to join in. This also works to break the ice and introduce yourself (and your company) to potential clients.

9. Write a Blog!
Seriously! As we were taking silly pictures or asking weird questions, we received some odd looks. Once we shared that we were taking pictures for our company blog, people shifted from curiosity to wanting to participate. We even got the President of DLZ Industrial to take a picture with a band that looked straight out of Mardi Gras. People who were strangers 10-seconds before were standing shoulder-to-shoulder with wide smiles as long as it was “for the blog.” Some of the most serious people we met opened up and allowed their caricature to be drawn or give a piggy back ride in the name of fun. Who knew those things were a blog away?

My biggest take away from our week at the Iron and Steel conference is that work is serious business, but you do not have to be serious to do work. Sometimes, it is okay to loosen the tie and allow yourself to enjoy life for a while.