How May Climate Change Affect the Future of the Ohio River Basin?

One can argue whether or not global warming is occurring, but facts prevent the argument that our climate is not changing. For example, this was the first year on record for three hurricanes to hit the U.S. at Category 4 or greater – Harvey (category 4), Irma (category 5) and Jose (category 4). In addition, Houston has had a 500-year flood event each of the last three years. The probability of three successive 500-year flood events is 0.000000008. In the national media we often hear how climate change will impact the coastal states, but how will it affect us here in the Ohio River Basin? I had the privilege of being the Project Manager for a recent study that was the first comprehensive study to evaluate the impacts of climate change on the Ohio River Basin’s water resources infrastructure and its ecosystem. It was conducted by a team of engineers and scientists from the U.S. Army Corps of Engineers (USACE), USEPA, the National Weather Service’s Ohio River Forecast Center, U.S. Geological Survey (USGS), Marshall University, the University of Cincinnati, the University of New Hampshire, The Nature Conservancy, and several consulting firms.

The study was led and funded by the USACE, which has a compelling need to understand and adapt to climate change because our nation’s water resources infrastructure represents tremendous federal investment that supports public safety and local and national economies. In an effort to gain a better understanding of how climate change could impact the nation’s water resources infrastructure and our ecosystems, the USACE conducted 19 climate change pilot studies across the U.S. to test new ideas and develop new information needed to develop national policy and guidance. One of these pilot studies was conducted on the Ohio River Basin. 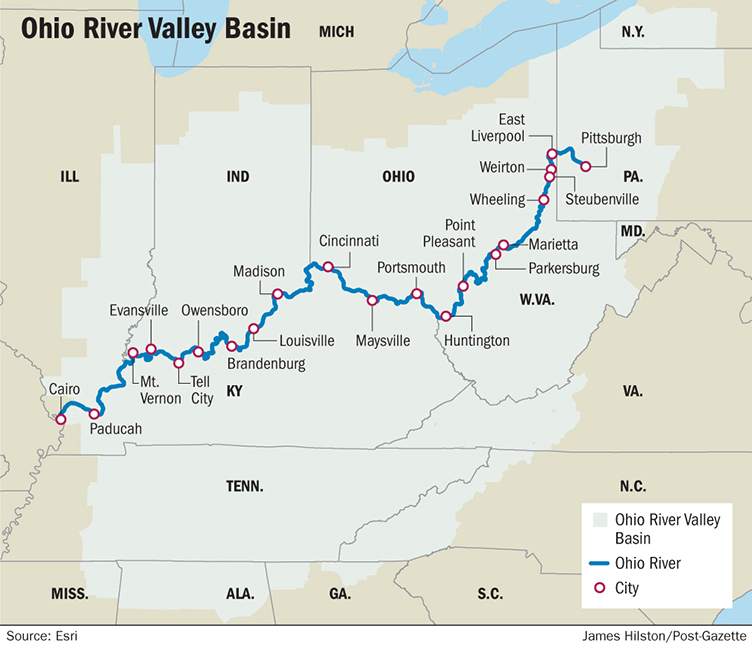 The Ohio River Basin contains a multitude of reservoirs, locks and dams, power generation plants and other types of infrastructure that depend on sustainable water resources. In addition, ecological resources in the basin include numerous federally-protected species that may be at risk from climate change. The two primary purposes of the study were to investigate how climate change could impact water resources infrastructure (locks, dams, levees, etc.) and the potential effects of climate change on the basin’s aquatic and terrestrial ecosystems and threatened and endangered species.

The Ohio River Basin is over 204,000 square miles and covers all or parts of 14 states stretching from New York to Alabama. It is home to 27 million people, five million of which rely on the Ohio River for drinking water. Water resources in the basin provide $1.5 billion to the nation’s economy each year.

The study was based on a global climate change model produced by the International Panel on Climate Change and adapted by an interagency water resources group comprised of four federal government entities, including the USGS and the National Oceanic and Atmospheric Administration. The Ohio River Forecast Center (ORFC) modeled mean air temperature and average precipitation over three 30-year periods: from 2011-2040, from 2041-2070, and from 2071-2099 at 25 gage points throughout the basin. However, before conducting these out-year simulations, the ORFC back-casted the model for the period from 1952-2001. Remarkably, the output data for temperature and stream flows from the back-casted model was within 2% of observed historical readings in all 25 data points throughout the basin. Therefore, the model was calibrated very accurately.

The model predicted there will be little change in air temperature and precipitation from 2011-2040. However, from 2041 to 2099, the northeastern and eastern portions of the basin will experience greater rainfall and river discharges. Specifically, as much as 35%-50% greater stream flows during the spring within the Allegheny, Monongahela, Kanawha and Big Sandy River sub-basins. During this same period, the northwestern and western portions of the basin also will experience greater rainfall and river discharges in the spring season, but the fall season will bring significant reductions in rainfall and thus decreased river flows and possibly drought. The model predicted as much as 25%-35% less flows during the fall within the Great Miami, Wabash, East Fork of the Wabash, White, Scioto and Muskingum River Basins.

In summary, between 2011-2040 the mean, maximum and minimum flows are within the historical range. However, from 2041-2099 the minimum flows are likely to decrease in the fall and peak spring floods are likely to increase. The good news is we have about 20 years to take action to plan for and minimize the potential negative impacts to our basin due to climate change. 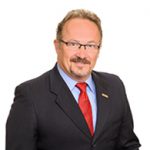 Mark Kessinger is DLZ’s VP of Water Resources and Dam Safety. He joined DLZ in 2016 following a distinguished career with the U.S. Army Corps of Engineers where he led the formation of ORBA and managed a wide range of water resources projects involving dams, locks, floodwalls and ecosystem restoration.